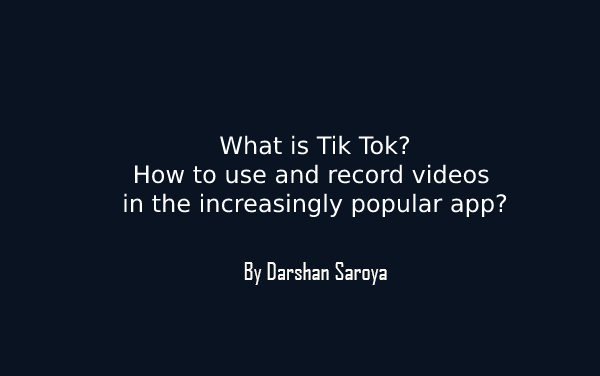 What is Tik Tok? How to use and record videos in the increasingly popular app?

What is Tik Tok?

Tik Tok is a rapidly growing mobile app. (here you could also joke about a popular song from 10 years ago, but I won’t). Tik Tok is an application, the essence of which is to create 15-second and 60-second videos with a wide variety of effects. In addition to short vines, social video hosting allows you to broadcast live. At its core, an app for creating short vines is a successful mixture of all the best that is available on Instagram, Snapchat and other similar applications. Initially, Tik Tok was used mainly by creative people from the music field, which is directly related to the history of the creation of the Tik Tok application.

The history of creation and evolution of the TikTok application

The Tik Tok app traces its history back to China, where it was launched in September 2016. Interestingly, despite its Chinese roots, the TikTok app is not available in China. For a Chinese audience, Tik Tok is called Douyin. For the international market, a separate application was created called Tik Tok, which is associated with Chinese censorship on the Internet. An international copy of the application was launched in 2017 by ByteDance, which began the rapid rise in popularity of TikTok in the world. In November 2017, the management company acquired the popular music service musical.ly and in August 2018 it was merged with the TikTok application. That is why the core audience of the TikTok app are creative people and musicians. Thanks to the merger, the Vine short video maker became the most downloaded Vine app in a matter of months in the United States and several other Western countries. In addition, the success of the promotion of the TikTok application was influenced by the closure of the Vine service, which also specialized in short videos. In February 2019, according to statistics, the TikTok application is already used by about 1,000,000,000 people around the world (taking into account the installations of Chinese users of the Douyin application). The TikTok mobile application has been translated into more than 75 languages ​​of the world and is available for download in 150 countries. In Russia, TikTok is also gaining popularity, so according to statistics from representatives of the Chinese TikTok, the monthly Russian audience of the service already amounts to about 8 million users, who view about 10 billion videos per month.

Thanks to the musical component in the form of a huge library of songs from the former musical.ly service, the TikTok social network allows you to combine your creative short videos with a large database of musical content, and this is possible absolutely legally, which distinguishes them from competitors.

How to download and register in the TikTok application?

You can download the latest version of the TikTok application on the official platforms for iOS and Android:

The download and installation does not take a long time, so after downloading you can immediately start using the application. However, without registration, the application’s capabilities will be limited, since you can only flip through the feeds with videos of other users. For full access to all TikTok features and video publishing, you will need to register. You can register with TikTok both by phone and mail, as well as through existing social networks. Registration through already registered networks such as VKontakte, Instagram, Twitter, Facebook and Google.

Is it possible to run Tik Tok on a computer?

Tik Tok positions itself as a mobile application, so, unfortunately, there is no official web version for PC yet. However, there is a site tiktok.com, where a login is available for logging in from a computer, which leaves hope for the development and early launch of the web version. If you still need to log into TikTok from your computer right now, do not worry, because there is such an opportunity, this can be implemented through the Bluestacks android emulator (there are other emulators, for example, Nox).

How to use and how to shoot a video in Tik Tok?

So, we have successfully completed the registration, now let’s look at the main features and functions of the TikTok mobile application. In many ways, the TikTok app resembles other similar apps and social networks tied to video – Instagram, Snapchat, Vine and Pericsope. Therefore, if you have used at least one of them, then it will not be difficult for you to figure out how to use TikTok and its functionality.

Navigation in the TikTok application occurs using the tabs that are located at the bottom of the screen. The first tab “Home” is a ribbon and is divided into a recommended one, which is based on your interests and previous views and subscriptions, as well as subscriptions, where you watch all the videos to which you are subscribed. To interact with content from the feed, there are also a number of buttons on the right, which are responsible for following, like, commenting, reposting to other social networks, as well as a set of additional functions. At the bottom of the screen there is also information about the video and the track used.

To switch to the next or previous video in TikTok, you just need to swipe (swipe) the current video up or down with your finger.

The next tab is the “Interesting” tab. This tab is a search, as well as the most popular hashtags at the moment. On this tab, you can view the most popular videos in the TikTok application and also using the search you can find the person you need or the content you need.

The third section of the Tik Tok navigation contains incoming messages, as well as notifications about likes, subscriptions, comments and mentions, that is, in fact, all your activity.

The final section of the profile is very similar to the profile section on Instagram. This is where information about you and all your content is located. In addition, it also contains statistics on subscribers and the total number of likes. On the top panel in the “Profile” section there is a button to add and search your friends from contacts and other social networks. In addition, there is also a button at the top of the screen to call the application settings and a link to your personal QR code, by which you can be found and subscribed.

To shoot a video in the TikTok application, you just need to click on the plus sign in the center of the bottom panel. Clicking the center button with a plus sign will take you to the section for adding your content. You can publish a ready-made video from your phone, or shoot it right now. For video editing, TikTok has a ton of tool options. A fairly high number of different filters, stickers and masks for your videos, which can also be sorted by popularity.

To add music to your video, you must click on the corresponding button at the top of the screen. After that, a whole additional section with music opens, which includes a number of subsections: interesting, favorites, playlists, Russian hits, and so on. In general, a large number of music tracks broken down by genres and topics for every taste.

Video recording in TikTok is done by constantly pressing the recording button. After the end of video recording, adding music and various effects, the publication section opens, where everything is already familiar. In the post section, you add a description to your video, provide hashtags and friends if needed, and set your privacy settings, which include enabling comments, duet or reaction, and the ability to watch the video.

It is also worth noting that when you publish a ready-made video from your phone to TikTok, a number of settings are added, you can cut, rotate, crop, slow down or speed up your video. In addition, the video can be looped or added to reverse playback of your video. The rest of the settings are exactly the same as when adding a new video and were described above.

How to make a duet in Tik Tok?

One of the features of the popular and trendy Tik Tok app is the ability to record duets. The duet in Tik Tok implies joint recording (collaboration) of videos with other authors. To make a duet in Tik Tok, just select the video you like, press the share button and select “create a duet” there. After that, it takes a few seconds to prepare Tik Tok to record the duet. upon completion of the download, the screen of your phone will be divided into two equal parts, in one of which there will be the selected video and in the second your answer. When recording a duet in TikTok, you have access to all the same tools and filters as in a regular video recording.

You can record a duet both with friends and with popular TikTok bloggers, who have opened the possibility of creating a duet for their videos. It all depends on your creativity and imagination, because the capabilities of the built-in video editor TikTok allow it.

The best ways to cheat and get followers for TikTok

Due to the rapid growth in popularity and audience of TikTok, more and more new users register in the application and try to promote their account.

One of the most effective ways to promote your channel on TikTok, as in other social networks, is to create and work on your content. 90 percent of successful promotion on TikTok depends on the video itself, its creativity, the presence of popular music and other design. Therefore, for the successful promotion of your page on TikTok, you need to concentrate all your efforts on creating a new viral video that will hook your viewers. Also of great importance in the long term is the regularity of publications in your TikTok profile. It is necessary to select a certain time and days when you will be stably off Adding your videos.

However, if you shoot and create creative videos, post them on a regular and constant basis, but there is no effect, then you may need advertising and some tricks to boost your initial and basic audience, with which it will be easier to start and promote the page further.

The most effective way to boost TikTok subscribers is to order advertising and PR from popular bloggers and TikTok pages. This way you can get the most interested and loyal audience.

Also, one of the ways to cheat tiktok likes and fans can be third-party specialized services:

These services have been verified by me personally (except for the last one), so you can use it if the free methods of Tik Tok promotion do not bring the desired effect.

Using a website to teach what you’re really good at
Why Do You Need an SEO Agency in Brisbane?
Related Posts 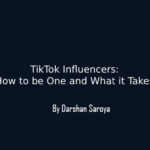 TikTok Influencer: How to be One and What it Takes

Do you have what it takes to be a TikTok influencer? If you’re not sure,…