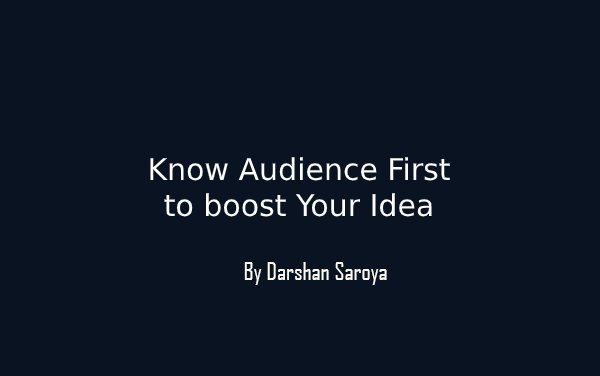 We can read many books, articles about Entrepreneurship these days. It’s told us how an idea changes one’s life. Having an idea is not enough for a successful Entrepreneurship. We mostly heard successful stories. Some ideas are strong enough that they don’t need other parameters to play a role in success. But most of Entrepreneurs are not a success as others or just failed even with a brilliant idea.

If we case study the scenario, the reason for not being a success can detect. There might be a lot of reasons but here I will consider one case where most of Entrepreneurs failed to boost their idea.

In most of the case, the product is created first then it supplies to market, but as an idea is always a fresh thing, we need to know its market first. If there is no market, we need to identify the target audience first.

Is your idea can be successfully feasible?

This is the most important thing for an idea. Without any target audience, you can create a market for your product/trend. For example, Alex has a new type of t-shirt idea and he is pretty sure that it will be liked by everyone. But it’s the only assumption. And only with self-assumptions, an idea should not be converted into a product.

But the confidence of Alex is high and he wants to work on his idea. Should he start working on it? Or he needs to do further research? What do you think?

I am pretty sure; you go with 2nd option. Now we can explore the parameters briefly. These parameters determine if the product is launch, will it get customers.

As Alex design a new type of t-shirt, so first need to know if there is other who like his design. One who really wants to try his design.

The one who willing to buy/try your product is your target audience.

Now question how Alex can find his target audience. There are some possible ways for it.

By following Influencers Alex can know about current market standard and trends. Also, get to know how volatile trends change in this market. Case study educates him about the difficulties he can get in the market. Survey results add a real figure to his research. With these methods, he can find out about his targeting audience.

If you know any other way, you can let me know via comment, it will increase article value.

With the above method, Alex found that people are not much aware of his idea. So, he decides to talk about it.

Sometimes an idea is so unique that people don’t know anything about it.

Your idea may be good enough that most people love it, but they don’t have an idea about it. But sometimes it’s necessary to know more about it before use it. Once they know about it they will decide to use it or not.

Now the question is how Alex educate others about his idea. Again, there are some proven methods.

Content marketing is the best and perfect method to promote anything online. By creating unique and interesting content, video Alex not only educates people about his idea but also interact with them. By interact, he can refine his idea.

Although content writing takes time to grow audience, Alex can collaborate with other influencers, publish guest posts on a famous website, run an online ad campaign to increase his reach. So that more people know about his product idea.

Like these ways, Alex builds a target audience for his product. He can also host a launch party with his followers and giveaway some samples. By giveaway, Alex can find real feedback and update product as per feedback he got. It will increase the value of his product and he also gets some testimonials for his landing page.

Like that Alex builds target audience first then build the product. And in such a way, he never failed. While researching he finds that his idea will not be working, he stops working on it. But still, he has some audience which can be his target for his next idea.

No Ifs, Buts Or Whys: This Is The Impact Of Buying TikTok Followers
The Ultimate Guide to Email Marketing for Small Business
About author